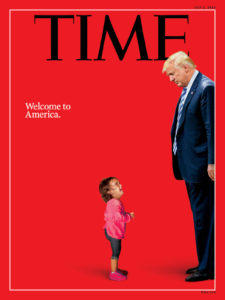 Or if Mueller subpoenas Trump to testify and Trump defies the subpoena, it’s a constitutional crisis.

Or if Mueller comes up with substantial evidence that Trump is guilty of colluding with Russia or of obstructing justice but the House doesn’t move to impeach him, we’ll have a constitutional crisis.

We have news for you. We’re already in a constitutional crisis. For a year and a half the president of the United States has been carrying out a systemic attack on the institutions of our democracy.

A constitutional crisis does not occur suddenly like a coup. It occurs gradually.

The current crisis began during the waning days of the 2016 campaign, when Trump refused to say whether he’d be bound by the election results if Hillary Clinton won.

It continued through March 4, 2017, when Trump claimed, without evidence, that Barack Obama had wiretapped his phones in Trump Tower during the campaign.

It deepened in May 2017, when, by his own admission, Trump was thinking of “this Russia thing” when he decided to fire FBI Director James Comey, who had been leading the bureau’s investigation into Russian meddling in the 2016 election, and then admitted to Russian officials that firing Comey had relieved “great pressure” on him “because of Russia,” according to a document summarizing the meeting.

Over the last few weeks, Trump has done just this.

First he accuses the FBI of sending a spy to secretly infiltrate his 2016 campaign “for political purposes.” Then he “demands” that the FBI investigate the spying.

Trump blames the entire Mueller investigation on a conspiratorial “deep state” intent on removing him from office. He uses pardons to demonstrate to those already being investigated that they shouldn’t cooperate because he can pardon them, too.

He claims he has the absolute right to pardon himself and can thereby immunize himself from any outcome.

The constitutional crisis worsens every time Trump berates judges who disagree with him, attacks intelligence agencies that won’t do his bidding, and calls journalists and news organizations that criticize him “enemies of the people.”

It intensifies when he uses the presidency as a personal fiefdom to enrich himself and his family; unilaterally breaks treaties and starts trade wars with long-standing allies.

The crux of America’s current constitutional crisis is this: Our system of government was designed to constrain power, but Trump doesn’t want to be constrained.

Our system was conceived as a means of promoting the public interest, but Trump wants to promote only his own interest.

Our system was organized to bind presidents to the Constitution, but Trump doesn’t want to be bound by anything.

The crisis will therefore worsen as long as Trump can get away with it. A megalomaniac unconstrained by countervailing power becomes only more maniacal. He will fill whatever political void exists with his unbridled ego.

The only legal way to constrain Trump is to vote for a Congress this November that will stand up to him. And then, in November 2020, vote him and his regime out of office.

If he refuses to accept the results of that election, as he threatened to do if he lost the 2016 election, he will have to be forcefully removed from office.

Friends, we are no longer trying to avert a constitutional crisis. We are living one. The question is how to stop it from destroying what’s left of our democracy.

Vangie Williams of King George County is the Democratic Party nominee for Virginia’s First Congressional District seat in the US House of Representatives.  She will face incumbent Congressman Rob Wittman (Republican) in the November 6, 2018, general election.

Rob Wittman has been in Congress since 2010, during which time his personal net worth has increased 15 times.  How many of us have seen our personal wealth increase X 15?

Vangie will listen to and work for the people of the First District, not for special interests.

Let’s go all in for Vangie!!

Here is the FireWittman.com website with information about why Wittman must go.

This is a link to a spreadsheet prepared by First Congressional District Democrats that compares our three candidates.

The sole agenda item will be discussion of the candidates.

If you want to lobby for a particular candidate and be sure to speak,  we will post a signup sheet by the door.  We will set a timer and try to assure that all can participate.

Here is the FireWittman.com website with information about why Wittman must go.

This is a link to a spreadsheet prepared by First Congressional District Democrats that compares our three candidates.

The Northumberland County Democratic Party meetings have moved online because of COVID restrictions.:
-- Third Thursday of each month
-- 6:00 PM

We will post on this website the link to the monthly meeting a few days before the meeting -- requires that you have ZOOM installed on your computer, tablet, or smartphone.