GERRYMANDERING is the deliberate manipulation of legislative district boundaries to give and advantage to or to benefit a particular party or group, or to cause disadvantage or harm to an opposing party or group. It distorts the electoral process, undermines democracy, and renders legislative elections a meaningless exercise. It’s a conflict of interest for the legislature to draw it’s own district lines.

Why is Gerrymandering so important?

We live in a representative democracy — that is, we elect people to represent us at local, state, and federal levels.  Logically, the best way to determine who is represented by a “representative,” is to divide the area into districts evenly by population.

North Carolina’s 12th Congressional District is considered to be one of the worst cases of gerrymandering in the nation.  The district was drawn to be “majority-minority” — that is, to pack African-Americans into a single district, thereby diluting their voting influence. 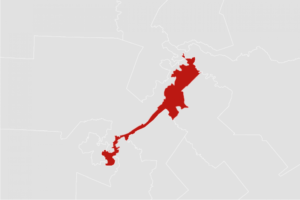 And here are two articles that discuss gerrymandering in detail.

Gerrymandering is Even More Infuriating When You Can Actually See It, Salon.

The definitive book on Republican gerrymandering, 2000-2016, and its impact on the US Congress is:

How Does the Process Work in Virginia? (Here’s how we can fix it.)

Virginia is ranked as one of the most gerrymandered states in the country both on the congressional and state levels based on lack of compactness and contiguity of its districts.[1] Virginia is ranked the 5th worst in the country.[2] Throughout the Commonwealth, counties and cities are being broken in half or into multiple pieces to create heavily partisan districts.

Forty-six localities are split in the Virginia Senate district maps and 59 localities divided in the House of Delegates’ maps.[3] In 2013, 56 candidates in the House of Delegates faced no real competition in the general election, with 22 Democrats and 34 Republicans facing no major-party challenger. Of the remaining 44 races, only 19 were considered competitive to some degree. In the end, only two seats changed parties. [4] [5]

Massachusetts Governor Elbridge Gerry may get the credit for being the first to use political maps as a tool to influence elections, but “gerrymandering” as the method has been coined, is believed to have originated in our Commonwealth much earlier. Scholars point to Gov. Patrick Henry as the first example of political redistricting in the United States. In the 1780s he attempted to fix an election by creating a district to force Federalist James Madison to face Anti-Federalist James Monroe. The practice of gerrymandering has not changed much in the past 228 years…what has changed is the technology used to draw the lines more ruthlessly and effectively, and the large amounts of money behind this subtle practice.

Why is this important?

Because — every ten years the US conducts a nationwide census.  As a result of people moving, some areas lose population, others gain.  For this reason, state and federal electoral districts must be re-drawn every ten years to reflect population changes — one state may lose a Congressional seat while another state gains a seat.  Thus, in the year following each federal census, the nation undergoes REDISTRICTING — after the 2020 federal census, redistricting will be done in 2021.

We must ensure that the 2021 redistricting process in Virginia (and nationwide, for that matter) is done fairly and does not result in more gerrymandering to benefit one or the other political parties or any group.

What can you do?