We are Democrats because . . .

1. We believe we have a responsibility to help those who are unable to help themselves, and governments at all levels are the effective means for all of us to work together in a common effort to improve the lives of the less fortunate, thereby making a stronger community for everyone.

2. We believe our free enterprise economic system maximizes economic opportunity and rewards for all. However, we also know history has shown that without any controls on the system it will produce serious abuses including misuse of investors’ funds; price fixing; abuse of workers; environmental degradation; and severely inequitable wealth distribution. Government has an essential role to play in minimizing these abuses and in correcting damage already done.

3. We believe governments at all levels are the only effective means of implementing the rule of law to ensure justice, equity, non-discrimination, and equal opportunity for all.

5. We believe the Federal government must ensure an effective defense against real aggressors or threats to our physical safety, while avoiding any military adventures intended to impose our policies, economic interests, religious beliefs, or lifestyle on others.

6. We believe governments should practice sound financial management based on a fair tax system in which everyone pays relative to their ability to pay.

1. Continuing the Social Security program in its present form, with minor modifications, to ensure a dignified life for the elderly and disabled.

2. Continuing the Medicare program to ensure health care for the elderly and disabled, with improvements to manage cost growth more effectively.

3. Ensuring health care availability for everyone, regardless of income or wealth.

4. A public education system that provides everyone an opportunity to develop their talents and abilities.

5. Regulation of banks, brokers, and all other financial institutions that handle other people’s money, to avoid a repeat of the financial crisis that caused the Great Recession of the Bush Administration and the Great Depression of the 1930’s.

7. Labor unions and the rights of workers to organize into unions, because unions are minimize abuse of workers and ensure safe working conditions with a livable wage.

8. An end to the tax breaks for the wealthy, including ending the income tax breaks for the wealthy enacted during the Bush Administration; an end to the low tax rates on dividends and capital gains which primarily help the wealthy; and an end to the exemption from Social Security taxes on any income over $106,800 annually. These actions are essential to undo the deficit built up during the Bush Administration, and to ensure the permanent solvency for the Social Security program.

9. Fair immigration reform that recognizes the reality that illegal immigrants come to this country because employers provide jobs to them, usually with low wages. A major portion of the burden of resolving this problem must be placed on employers of illegals, rather than entirely on the illegal workers and those attempting to guard the borders.

10. The right to equal legal protection and privacy for all, including women, racial minorities, religious minorities, and gays and lesbians.

11. An end to military adventures against nations that do not threaten us, and, an end to spending on unneeded weapons systems simply to support defense contractors.

12. Action to eliminate the Federal budget deficit over the next ten years, through reduced spending, elimination of special-interest tax credits, and an increase in tax rates, so that the burden is shared equitably by all, rather than primarily by lower income citizens. We can return to a budget surplus like that at the end of the Clinton Administration without destroying the safety net for Americans.

In summary, this is why we are Democrats 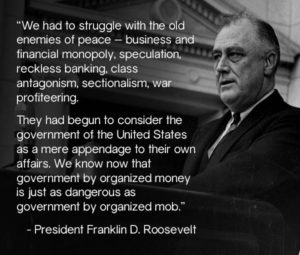